From Heartache to Healing: The Story of Gerzon Gómez 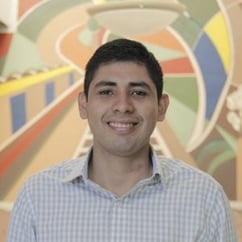 ENLACE Church Coach, Gerzon Gómez is no stranger to complete and utter heartache. When he was young and the problem of gang violence was part of his daily context, his mother was killed by a stray bullet. His father hadn’t been a part of the family and so when she died, Gerzon and his 9 siblings were left orphaned. It was a scary and uncertain time, one that Gerzon still grieves over.

However, a loving uncle took Gerzon in and provided a place of love. Uncle Orestes not only took the children under his wing, but he also paid for Gerzon to attend school and taught him about God. Gerzon responded to this by working hard and ultimately winning a scholarship from the Mayor’s Office of San Vicente to study at the prestigious Salverio Navarrete Institute.

The scholarship helped but didn’t cover everything. Instead of giving up, he got a job as an assistant bricklayer during the day and took classes at night. His effort didn’t  go unnoticed by his peers who applied for a grant for him which won him a stipend that covered basic expenses and food. Because of that, Gerzon was able to go back to school during the day and complete his studies.

After graduation, Gerzon was offered a job as a watchman and janitor at the church he attended. He hoped to continue studying at another university to get a theology degree, but  layoffs and other less-paying jobs made it impossible. When Gerzon was out of work he prayed for God’s guidance and help. Even still, nothing seemed to change. 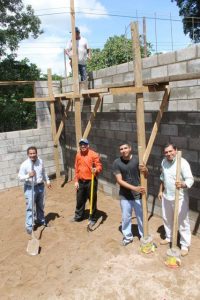 After learning about ENLACE, Gerzon wasn’t sure what kind of ministry this was. It wasn’t like any Christian organization that he’d been a part of before. However, after a few interviews, he was surprised that an organization would be dedicated to helping churches reach out. It completely changed his point of view of the mission of the church and the calling of servant-leaders.

When he was younger, he’d always desired to help people in some way, just like his Uncle Orestes helped him. But to base the way church was done on that idea was new to him. “When I came to ENLACE, I understood that God was guiding me in this way. Unfortunately, many times one becomes selfish and wants the Lord to give and to bless...But this (job) is different...Working in Abelines has impacted me greatly. The churches aren’t looking for their own comfort...

I had only heard of missionary work, but had never had the opportunity to live it."