The Story of Water in San Jacinto and the Zurisadai Church 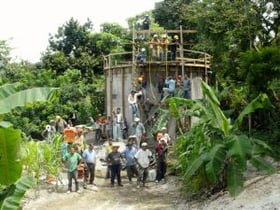 Back in 2012, in the community of San Jacinto, 40 percent (680 people) did not have access to clean water. The remaining 60 percent of the population (1,020 people) had access to water every other day for 20 minutes. And the water that was available wasn’t treated and contributed to many water-borne illnesses that especially affected children under five years of age with grave sickness and sometime death. This was the case even though the community had an abundant source of water from a nearby shallow spring. However, the water system that drew from that spring was over 35 years old and needed upgrades in order to serve the needs of local residents. Additionally, the organizational capacity of the community water board wasn’t strong enough to take on and implement a community-wide clean water plan.

The Zurisadai Church had begun to work with ENLACE and create a vision and plan to serve its community. The congregation of 170 members led by its pastor, Mauricio Alvarado, are all very poor themselves. It was possible for them to see themselves as people who need rather than people who give. But with encouragement and empowerment, this local church chose to serve.

With incredible excitement and speed, Pastor Mauricio and many church members joined the local community association and helped to make the group more representative, organized and inspired to serve. Along with many other projects such as road repairs, the construction of dozens of homes, and home gardens, they decided to take on the community’s need for clean and accessible water. 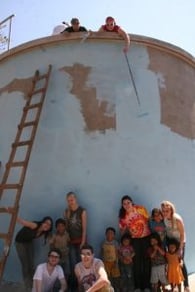 Between 2012-2013 the church-led community project of building a water system came into being.

The water system is a spring and tank system that distributes clean water to each household of the community. The system is comprised of two springs, three water tanks, a pumping station, and piping that distributes the water by gravity to each household. The water is pumped from the springs to a pumping station and then to water tanks where it’s tested and treated. The water flows from the tanks by gravity through a network of pipes into each household. Each house has its own connection and a meter to measure water use and pay accordingly. The very small fee for water use is then used to finance system maintenance. The improvement to the organizational capacity of the water board has enabled this last piece to maintain clean water for 4 years to all residents.

Because the local church was supported in serving its community, this water system: 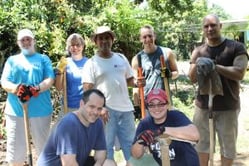 Willow Creek Community Church in South Barrington, Illinois supported this system both financially and by sending a serving team to San Jacinto in 2012 which helped install part of the system.

Team member Joy Bork said, "This experience really helped me see how the local church is the hope of the world. Through pairing together with ENLACE and Zurisadai, I was able to be a tangible representation of Christ's hands and feet in the community of San Jacinto."

and her husband, Juan Atilio Hernandez, 40, have three children and live in San Jacinto. Rosa was born in San Jacinto and has experienced water shortages her entire life. Her father used to take them to the river to bathe and that is what she and her children used to do every day. They would begin their trek to to river every afternoon after school and it would take at least 40 minutes one way. It would take longer on the return because of the heavy load of wet laundry that had been washed. She received her household connection in April 2013. She said, "It is a joy to have abundant clean water at home. It is incredible to have enough water to wash clothes, dishes and corn and not have to take long journeys to the river to bathe and wash."