The Butterfly Effect: Do Overseas Missions Actually Make an Impact? 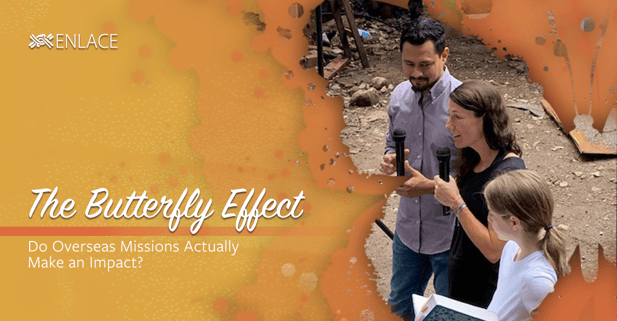 1. the phenomenon whereby a minute localized change in a complex system can have large effects elsewhere.

One day about fifty years ago, after running a computer program that simulated weather patterns, MIT meteorology professor, Edward Lorenz, had an epiphany. The computer model he’d developed had run through a series of scenarios. The model was based on 12 variables (such as wind speed and temperature), and with just one small alteration, subsequent weather patterns changed drastically.

Lorenz’s insight was later coined by James Gleick’s as “The Butterfly Effect” in his book, Chaos: Making a New Science, published in 1987, ushering the idea into mainstream discourse. (If you’re a nerd like me and want to learn more, you might find this video fascinating.)

What We Do Matters

Since that time, the use of the term has become commonly used in popular culture. And while the theory can be rather complicated, when applied to human behavior, it can also be incredibly encouraging. When it comes to understanding one’s self in the grand scheme of things, with all the people in the world and with all the problems and opportunities and twists and turns we encounter, Lorenz’s meteorological insight tells us that what we do matters. And it can matter quite a lot.

We often hear about “the one teacher” who changed someone’s world. Or the few “words of wisdom” that turned someone’s life around. You might be able to recall a moment in your life in which an action, event, or a word changed you and perhaps changed your whole life’s trajectory.

As Christians, we know we are called to bring good things to the world, to shine as lights, to share God’s love. We want to put our faith into action. We know that faith without action isn’t faith at all. At one time or another, we’ve jumped in to donate or serve food; we’ve filled up a shoebox with supplies; we may have even joined a mission team, spending huge amounts of money to travel to participate in a charity project abroad.

But as we age and life becomes more complicated with growing responsibilities and less time to accomplish our goals, we also want to be a part of something that not only is making a positive difference in the world, but that’s sustainable. For many of us, there’s a measure of dissatisfaction that surrounds fleeting moments of one-sided charity, and we wonder if the giving may have warmed us up more than created any change long-term.

And sometimes we discover that best intentions don’t translate into good outcomes, as research has shown. It might be useful to note that Nature affirms our caution. After all, a butterfly may beat its wings on one side of the world and produce a tornado on the other.

ENLACE has shared this caution ever since we hosted our first service-learning trips back in the mid-1990s. What we have learned is that partnering with international, faith-based organizations/churches can be a double-edged sword. It is possible to hurt instead of help vulnerable populations. However, we have found that the experience of working with people who want to do good in the world has not just been helpful, but it has been vital.

We have found over and over again, that when good intentions are paired with best practices, people can have an incredible impact that transforms individuals, families, and whole communities.

One of the ways people in the U.S. and other countries who come to work with ENLACE and the communities in Central America make a meaningful impact isn’t only by the project they’ve worked on but by the encouragement they leave behind.

“I have known and seen many churches and leaders ready to give up. By the time the [international] partners come to work alongside our local churches, local pastors and leaders have gone through many things already. They have had a myriad of successes but also many challenges; They have made amazing achievements, but also have experienced many losses... As much as they want to stay above water and keep moving forward, their spirits and strength feel so drained and drowned that it seems impossible for them to go on.

Then suddenly, a group of brothers and sisters from another place in the world take the time and invest their resources to join them, and remind them through their service and hearts that God is with them and for them, and they are not alone in this journey, that there is a global church (the rest of the body of Christ) walking with them physically for a few days and in prayer forever. This experience is an encounter that rekindles their inner spirit and renews their strength to keep on moving in the right direction with a vigorous light and love.” 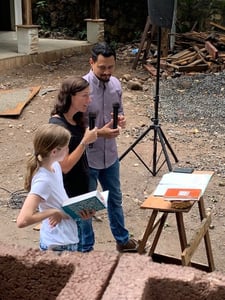 "Short-term mission teams that work with ENLACE are a fundamental part of the process of community transformation. We facilitate teams in such a way that brings value and dignity to local leaders. Together, as a team, we come to work alongside them, not telling them what to do. They are already doing God’s work! We just come to support. And this is the best way I have seen the local church honoring and glorifying God. [The churches] are so grateful to have worked with these teams. They know the effort it takes to come and the generosity they show them as they work together on projects they’ve already identified and were working on. It is a transforming experience."

Before and After: Butterfly Effect in Action

Recently, Patrick Cox, a Production Director for a prominent mortgage company based in Columbia, Missouri, visited communities in El Salvador. He was accompanied by his wife and daughter, and three other families.

Having heard for months about the horrible situations families were experiencing on the U.S. border, they wanted to respond. They wanted to go deeper into the crisis. They wanted to find out more about the push and pull factors that have contributed to the immigration crisis, and they wanted to serve as a family to make a significant impact in the lives of their neighbors to the south. So they came and learned, built life-saving latrines and left with a new vision for how they will serve in the future. 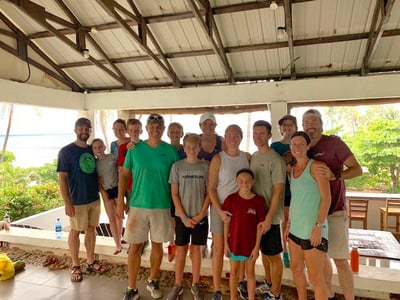 “At the beginning of October, my wife, daughter and I, along with three other families, were able to go on a short term mission/vision trip to El Salvador… In the afternoon of our third day, we departed Shutia for Cocalito, which is a community that ENLACE has been working with for eight years. We wanted to see the contrast between a community like Shutia that was just getting started with ENLACE and a community that had worked with them for a while.

I was so thankful we got to see the difference. We met in Cocalito with Pastor Israel and other community leaders who were having a meeting when we arrived about new ways to change the community. It was incredible listening to them educate us on how several years earlier, it would not have been safe for us to be in Cocalito due to the gang presence. They spoke of how they won over gang members’ mothers and eventually the gangs themselves who moved out of the community. We saw the school that was built in partnership with ENLACE, the community, and the church, as well as a housing project that the groups worked on together. 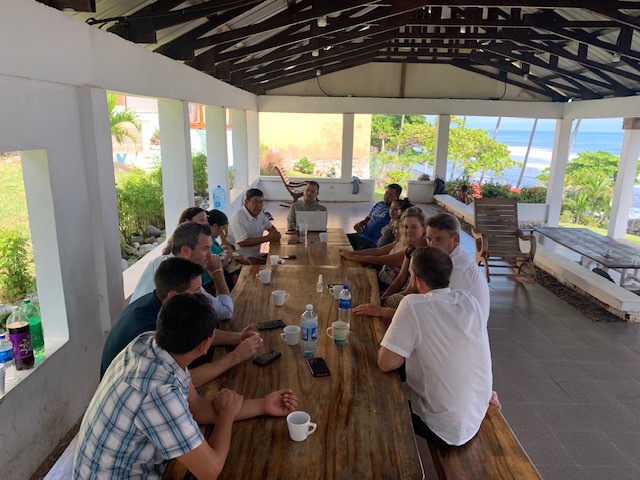 Ultimately, through our time there, I came to see the beauty of the type of collaboration that ENLACE participates in. They are contacted by a church leader or pastor with a heart for the community. They work with them through church coaches who, over time, raise them up into strong leaders in their own community who can then work with city governments and other local organizations to transform the communities they operate in. ENLACE works with all local members of that community to help run the projects and ensure they are sustainable even when ENLACE doesn’t have (international service) teams there to help. The work is going when we arrive and continues even better after we leave.”

A life lived like a caterpillar can certainly be an option. Many animals, like worms, live their lives close to or in the ground. They seem just fine with that. But if you are a caterpillar, think of the potential! A caterpillar that becomes a butterfly will someday beat its wings on one side of the world and produce a tornado of transformation on the other.

ENLACE conducts baseline research based on indicators of multidimensional poverty to measure the impact of its church-based and community-run initiatives. To find out more, contact us.